Jack Nelson Wheeler, age 69 died on September 14, 2022.  He was born in Urbana, Ohio to the late Grace Maxine Evilsizor Wheeler and Maurice R. Wheeler.
He is survived by his son Rex Alan Wheeler of Florida and his Sister Pam Wheeler Dailey and Brother-in-law Douglas A. Dailey of London, Ohio
Jack graduated from Madison Plains High School in 1972 where his love of Football excelled having the honor of being on the Plains HS Team of 68-69 and continuing to play all his school years. Jack had a great love for playing the drums and music along with claiming to be the Number One Fan of the Ohio State Football Team. Loved cars, he was a mustang enthusiast and an avid player at Play Station Racing meeting friends from around the world. Jack also loved Golf and Fishing. He had a great love for his Dogs, Cats, and Tropical Fish.  He enjoyed woodworking and was always making something.
A Celebration of Life is being planned for Saturday, October 1, 2022, from 3 to 6 PM at the home of his sister and brother-in-law Pam and Doug Dailey located at 3230 State Route 187 London, Ohio, for the information you may contact them at their Email

and you may use Facebook as well. Please visit

Jeffrey Steven Shaw, 61, of South Charleston, died Tuesday, September 20, 2022, in The Ohio State University Hospital.
Born October 20, 1960, in Columbus, he was a son of Teresa (Cronenwett) and Jeff Shaw.
A US Navy veteran, Steve had been a sheet metal fabricator. He loved listening to music and playing his guitar.
Survivors include his daughters Amber Shaw and Maegan Shaw; his mother Teresa Shaw, grandchildren Justin, Christian, Aidan, Everleigh and Maverick; sisters Gail Miller and Lisa Lane Brasket; nephew Josh Lane and niece Heather Rush.
He was preceded in death by his father, nephew Daniel Lane, uncle Mike Cronenwett and grandmother May Jane Cronenwett.
Funeral services are not planned at the time.
Memorial contributions for the benevolence of the family may be made to the Eberle-Fisher Funeral Home.
The family is being served by the EBERLE-FISHER FUNERAL HOME AND CREMATORY, 103 N. Main Street, London, Ohio 43140, where online condolences for the family may be sent to 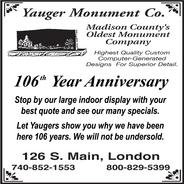 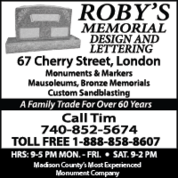 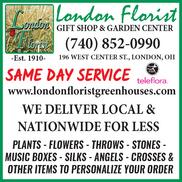 Ralph Eugene Ackley Jr, 75, passed away on Monday, September 26, 2022, in Grove City. He was born on August 11, 1947, the son of the late Ralph Eugene and Millicent Louies.
He enlisted in the Army in 1969 and is a Vietnam combat veteran and recipient of the Army Commendation Medal with Valor and the Purple Heart. He enjoyed hunting, shooting, and watching westerns and war movies.
He is survived by his brothers and sisters Alfred (Lil), Georgia (Jim), Carol, Bill, Teresa, Norman and his children Mitzi Schneider, Angela Ackley, Crystal Russell, Ridge Ackley, Millicent Ackley, and many loving grandchildren, great-grandchildren, nephews, nieces, great-nephews, and great-nieces.
Visitation will be held at the PORTER-TIDD FUNERAL HOME, 331 W. MAIN STREET, MOUNT STERLING, Saturday, October 1, 2022, from 9:30 A.M. - 10:30 A.M., with Funeral Service starting at 10:30 A.M. A graveside service will follow at Pleasant Cemetery with Military Honors.

​Gene M. Pass, 89, of London, died Tuesday, September 27, 2022, at his residence, surrounded by his loving family. Gene was born June 12, 1933, in Carlisle, Pennsylvania, the son of Charles and Mary (Brecker) Pass. He graduated from Carlisle High School in 1950. He was a longtime member of the First United Methodist Church of London, where he was very active. He was involved in the Boy Scouts of America for most of his life, starting at age eleven. He worked for the FAA for thirty-six years as a radar technician, retiring in 1996.

Gene was a United States Army veteran stationed overseas in Germany. During his retirement, he became very active as one of the many volunteers who founded the Friends of Madison County Parks and Trails.

Gene was preceded in death by his parents; nephew: Scott Pass; brother-in-law and sister-in-law: William and Clarissa Rutter. The family invites friends to call at the First United Methodist Church, London, Friday, from 4-7 PM or Saturday from 9-10:30 AM., where a funeral service will be held Saturday, 10:30 AM. with Pastor Dave Leckrone officiating.

Interment will follow at the Kirkwood Cemetery, London. The family has requested memorial contributions be made to the First United Methodist Church, 52 N. Main St, London or the Friends of Madison County Parks and Trails, PO Box 308, London, Ohio 43140 or Loving Care Hospice, 56 South Oak Street, London, Ohio. Envelopes will be available at the church. 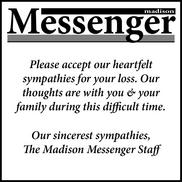 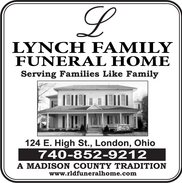 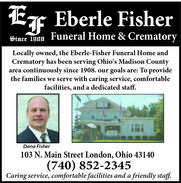 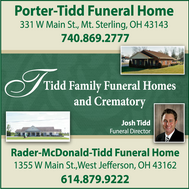 Barbara Cathel, age 84, of Orient, Ohio, passed September 26, 2022, at Meadow Grove Transitional Care in Grove City. Barbara was born March 8, 1938, in Kiousville, Ohio, the daughter of Donald E. And Rachael (Toops) Morehart.
Barbara was an active, long-time member of the Harrisburg United Methodist Church, where she led their book club and outreach programs. She was retired from Ohio State Life Insurance and was a member of the Pythian Sisters. Barbara loved gardening, reading mysteries, and spending time with her family.
She was preceded in death by her loving husband of 49 years, Joe Cathel; her daughter, JoLynn Davis; sisters, Judith Fletcher and Mary Dietz; and her feline companion, Mickey. She is survived by her grandchildren, Sarah Davis and Anthony J. (Cindy) Davis; great-grandchildren, Bella, Skylar, and Ivan; brother, Paul (Meg) Morehart; sister, Kathy Streitenberger; and many nieces and nephews.
A visitation will be held Friday, September 30, 2022, from 11 A.M.- 1:00 P.M., with Funeral Service starting at 1:00 P.M., at the PORTER-TIDD FUNERAL HOME, 331 W. Main Street, Mt. Sterling, Ohio, 43143. A Graveside Service will follow in Pleasant Cemetery, Mt. Sterling. Pastor Jim Blankenship will officiate the service.
To share your online condolence with Barbara's family, please visit www.portertiddfuneralhome.com ​

Eric Michael Lauter, 72 of London, died Monday, September 19, 2022, in his residence.
Born April 16, 1950, in Columbus, he was a son of Paul and Agnes (Barney) Lauter.
Eric had a passion and talent for fishing and spent his career working as a fishing guide.
He is survived by his children Emily, Jacob (Meagan), Addie (Patrick); grandchildren Olivia, MaKayla, Maurice, Hayden, Luke, Davis, Rylan, Jacob, Penn, Brooks and Liv; brothers Daniel and Christopher Lauter.
Eric was preceded in death by his parents.
Public services will not be observed in accordance with Eric’s wishes.
The family is being served by the EBERLE-FISHER FUNERAL HOME AND CREMATORY, 103 North Main Street, London, where online condolences are encouraged to be shared at

William Joseph Tanner Jr, known as Joey Tanner, was born February 20, 1987 and has sadly passed away at the very early age of 35 due to liver & kidney failure on September 14, 2022.
The last couple years have been time spent with fiancé and best friend Paige Davidson camping, fishing, & enjoying time outdoors.
Joey was preceded in death by parents Yvonne J Starner and William J Tanner Sr.
Survived by siblings Michelle R. Hester & Steven M Tanner. Joey adored his nieces and nephews and loved seeing them any chance he could : Derick L Thompson, Joseph L Hester, Makena L Hester, Rylee Tanner, & Logan Tanner.
Joey received his educational GED and officially graduated in the year of 2010 proudly. As a younger boy Joey was very proud of being an Eagle Scout in the Boy Scouts receiving many merit badges and achieved many accomplishments & as an adult Joey loved spending time with family and friends,  & listening to music, he also loved the outdoors, camping, fishing & he enjoyed yard sales, exploring, driving around and all things paranormal and being around those that he loved and cared for. Joey was a very kind hearted person and he did anything for anyone that he could, family, friends, or complete strangers no matter the circumstances.
If you would like, please join in a memorial service/celebration of life on September 24, 2022, from 2:00-4:00 P.M. at the PORTER-TIDD FUNERAL HOME, 331 W. MAIN STREET, MOUNT STERLING, OH, 43143, (740) 869-2777.
This isn’t goodbye, but until we meet again.
Please visit

Frieda Ann Dunbar, age 81, passed away on Saturday, September 17, 2022. Frieda graduated from West Jefferson High School Class of 1958, retired as an accountant from TOSOH SMD, Grove City, Ohio. Frieda enjoyed cooking and spending time with her family, especially her grandkids.
She is preceded in death by her parents Lunda and Venice Estep, husband of 44 years John R. Dunbar (2013).
Frieda is survived by her son David H. (Melissa A.) Dunbar, brother Roger Estep of Tucson, Az, grandchildren Madison E. Dunbar, Andrew H. Dunbar, and Evan M. Dunbar.
A Graveside Service will be held at 1:00 P.M., September 23, 2022, at the Oak Grove Cemetery, Georgesville, Ohio.
In lieu of flowers memorial donations may be made in Frieda’s name to the American Cancer Society, East Central Division, 5555 Frantz Road, Columbus, Ohio, 43017.